Primary membranous nephropathy (pMN), also described as primary membranous glomerulonephritis, is a chronic inflammatory disease of the glomeruli which is accompanied by a progressive impairment of the kidney function. The underlying autoimmune mechanism is based on the reaction of autoantibodies directed against the glycoproteins phospholipase A2 receptor (PLA2R) and thrombospondin type-1 domain-containing protein 7A (THSD7A). These transmembrane proteins are expressed on the surface of podocytes in human glomeruli. As a result of the binding of antibodies, the podocytes are damaged and protein enters the primary urine (proteinuria). pMN is the most frequent kidney disorder with nephrotic syndrome in adults. The disease is prevalent in all ethnic groups and genders, with men over 40 years old with white skin colour being more frequently affected. In young women with suspected pMN, lupus nephritis should be considered. Primary MN occurs very rarely in children. The primary form of MN should be discriminated from the secondary form, which can occur in infections, in drug therapy or abuse or intake of toxins, in collagenoses and other autoimmune diseases and in tumours, and which improves with treatment of the underlying disease. The treatment of pMN improves prognosis, particularly with respect to nephrotic syndrome and hypertonicity. 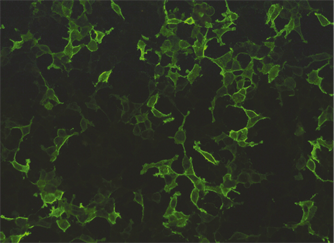 Diagnosis of pMN is made by kidney puncture, histological examination and electron microscopy of the kidney tissue. Characteristic here is the deposition of immunocomplexes on the outside of the glomerular basement membrane. Serological diagnosis of pMN, however, is less time-consuming and less stressful for the patient. The identification and characterisation of PLA2R and THSD7A as target antigens of circulating antibodies in pMN has proven to be of major importance for non-invasive diagnostics. Autoantibodies of class IgG against PLA2R are highly specific and can be found in the serum of up to 80% of patients with pMN. In contrast they are not exhibited by healthy blood donors or patients with secondary MN. In healthy persons and patients with secondary MN, these autoantibodies are not present. Reported prevalences for autoantibodies against THSD7A range up to 10%. Even though both antibodies can occur in parallel, anti-THSD7A antibodies are mainly found in anti-PLA2R-seronegative pMN patients. As a supplement to anti-PLA2R antibodies, anti-THSD7A antibodies are therefore another marker in the serological diagnosis of pMN. Due to their high specificity, they are equally suited for differentiation from secondary MN as anti-PLA2R antibodies.

The three methods IIFT, ELISA and ChLIA are available for the determination of autoantibodies against PLA2R. The IIFT allows a qualitiative to semiquantitative determination of human IgG autoantibodies against PLA2R, whilst the ELISA and ChLIA allow reliable quantification. The anti-PLA2R titer helps to assess the success of therapeutic measures. The serological finding with increase, decrease or disappearance of the antibody titer precedes the clinical image. Thus, the determination of the autoantibody titer has a high predictive value with respect to clinical remission or relapse and estimation of the risk of pMN reoccurence after kidney transplantation.

The Anti-THSD7A IIFT is an ideal supplementary test to the anti-PLA2R test systems. The serological detection rate is increased with parallel determination or a two-step screening strategy in which patients with a seronegative anti-PLA2R result are additionally investigated for anti-THSD7A antibodies.