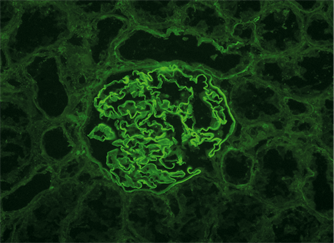 The primary target antigen of all anti-GBM glomerulonephritides, including the classic Goodpasture's syndrome, is the NC1 region of the alpha-3 chain of the network-structured type IV collagen of the basement membrane lamina densa. These autoantibodies, which can be detected qualitatively or quantitatively in IIFT and quantitatively in the Anti-GBM ELISA, can be directed against the alveolar basement membrane or against the glomerular basement membrane. In cases without lung involvement GBM antibodies are detected in the serum or plasma of over 60% of patients, in cases with lung involvement in over 90%. They are predominantly of class IgG, more rarely of class IgA and IgM. Clinical progression of the disease correlates with antibody concentration. High-titer circulating GBM antibodies indicate an unfavourable progression. With a negative serum result and continuing suspicion of anti-GBM glomerulonephritis, a kidney biopsy should be performed.