Unwanted childlessness can be due to immune-mediated destruction of reproductive tissue. The antibodies are directed e.g. against spermatozoa and steroid-producing cells in the ovaries and testes. The so-called autoimmune infertility often occurs in conjunction with other autoimmune diseases.

In 20% of immunological fertility disorders, anti-spermatozoa antibodies are detected in both male and female patients (autoantibodies/alloantibodies). The antibodies mainly affect the spermatozoa’s motility through surface binding and agglutination processes.

Antibodies against ovarian antigens are detected in women with primary ovarian insufficiency and after repeated in vitro fertilisation.  The autoantibodies are directed against different ovarian structures and inhibit the maturation of the ovum and its interaction with the spermatozoa. The target antigens are steroid-producing enzymes, especially in the cells of the theca interna, and the zona pellucida. 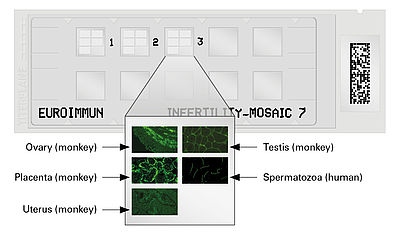 Using IIFT: The Infertility Mosaic -7 detects serum antibodies against spermatozoa and Leydig cells as well as against ovarian, placental and uterus antigen by means of indirect immunofluorescence. This combination of relevant reproductive tissues and cells allows detection of possible autoimmune-associated fertility disorders of both partners in one comprehensive test. 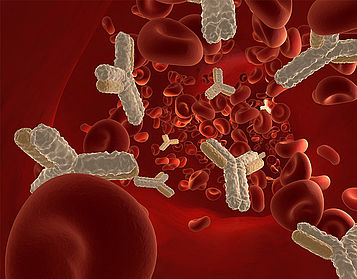